Best posts made by Dr. Trowel

Latest posts made by Dr. Trowel

To be honest, guys, I was really hoping to make all-original ships for this (I was not lucky enough to have these particular sets you speak of). But maybe after this I'll try my hand at a plug using some more established LEGO Themes. It could even be a community project!

That makes sense. Trying to be faithful to a pre-existing source can sometimes really slow down a project (gee, now how would I know that?). Still, you might look into at least using color schemes from the sets. That could make it easier to later integrate materials from 'em -- such as landing pics, perhaps.

EDIT: Speaking of color schemes, have you given any thought to how you're going to do ship explosions? I'm thinking of the way that ship bits fly off when ships die in Polycon (see the RLEs in the "Polycon Core 3" file), and how the Sorhal biological ships have their own govt-specific "death" RLE. It would be really cool to see Lego ships throw out pieces, especially if their colors reflected the colors of the ships.

)That's the one. Thanks. With a bit of creative wrangling, they could be an elite special ops unit/wing of any of the other groups, most notably the M-Trons, as I think it would be a bit too restrictive to say they are their own race who just happens to only inhabit frozen worlds. Sort of a hard way to build an empire..:) I love how all of their ships come with skis for landing.

Actually, it can be quite a good way to build an empire, if the frozen-world people have unique attributes or technologies that let them thrive on worlds on which no one else can succeed. If you can do that, you can establish beachheads in systems already inhabited by others and then either coexist or attack. Consider the hydrogen breathers of Uplift, or the Western Lapita peoples.

Planets will look the same as they always have - after all, even our jagged, mountainy Earth is proportionally smoother than a marble shooter (or so I hear). Stations will probably be LEGO-fied like the ships, though.

Hm. I would probably use other toys for planets, perhaps snipped from photos. Things like this, maybe: 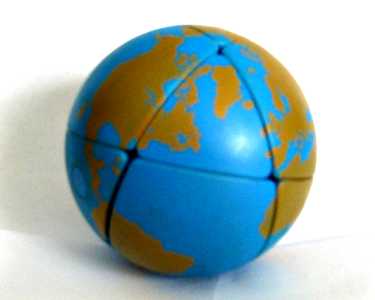 Or other things of the sort on that page. (There oughta be a better-focused photo of this puzzle toy elsewhere, though.)

Balls could be good. Here's one I particularly like:

The texture of that one is good. I like that it's big; bigger -- even much bigger -- would be good as well. That was just found on a store web page via a Google image search.

Basically, I'd try to extend a "play-room" theme from the ships to the planets, one way or another.

The first day of the fourth month used to be an important calendar event around here. Will it be this year? I wonder.

posted in EV Developer's Corner •
RE: An ancient project revisited.

I remember this project. (Actually, the thing that most jogged my memory was rereading Desprez's "Teddy bears that shoot beams out of their eyes" response.

If you do this, I have two suggestions:

Okay, here's a suggestion. Generic cargo missions shouldn't send you to a planet in the same system as where you picked the mission up. You can make some safe cash by going back and forth between Polaris Prime and Emperor's Fist.

You can't make much that way, though: the mission reward is formula-based, and distance is a factor. I see now why some of the threads dreaming about EV4 have been overrun by people drooling for "scripting." This could be powerful stuff!

Since this thread is in the Dev's Corner, I'll go ahead and post the formula for the generic missions as an example:

Not able to reproduce, but I'll look into it. See if you can get it to increment it at all. If not hack your save file and set it to 5 or so and it should allow you to get the more advanced missions. It's a bit strange though...

What OS and locales are you running?

I've run the ES cargo runs several times, checking es_misn after each and seeing no change. Other items in the save file do change, so it isn't simply locked.

I'm running OS X 10.5.6. Locales? I had to look up that term. If what you want is the output of the UNIX "locale" command without modifiers, here's that:

That's all there is. Haven't tried hacking the save file yet.

Thanks for the git link -- I knew Mercurial was "deprecated," but thought it was all I could reach without installing software.

Should it be possible to progress to missions beyond the generic Empire cargo runs? I've probably done at least a dozen.

I dug around a bit in the "Mercurial" files online, and I think that perhaps the es_misn variable is failing to increment when it should. Of course, I've never seen a lua file before, so I don't really know what I'm doing....

two potentially relevant snips from my save file:

Very small complaint: I like the distinctiveness of the sidebar, but I kept seeing gray ghosts moving across my radar.... Now I realize it's the background stars showing through the radar's "transparent" background. Not so fond of that.